AMNESTY INTERNATIONAL at the Fringe – 88 Generation Students of Burma 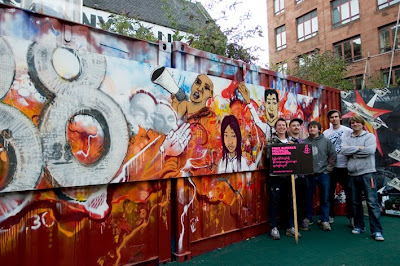 Graffiti art event at the Edinburgh Festival from Amnesty International on Vimeo.

It has been a a busy wee month, still more flicks to shovel onto this blog from as early as January!

(copied from Recoat Blog) ‘On the 7th of August 2010, a group of Recoat artists came together to create a collaborative mural at the C Venues during the Edinburgh Festival. The artists involved were Lyken, Derm, Conzo, Elph, Rekor and Syrkus.
We were commissioned by Amnesty International to paint the piece, which depicts themes surrounding the 88 Generation Students of Burma. You can read more about them, the project and Amnesty’s work here and see photos of the event here.’

Big Thanks to Amnesty and Recoat Gallery for having me on board for this at the Fringe.